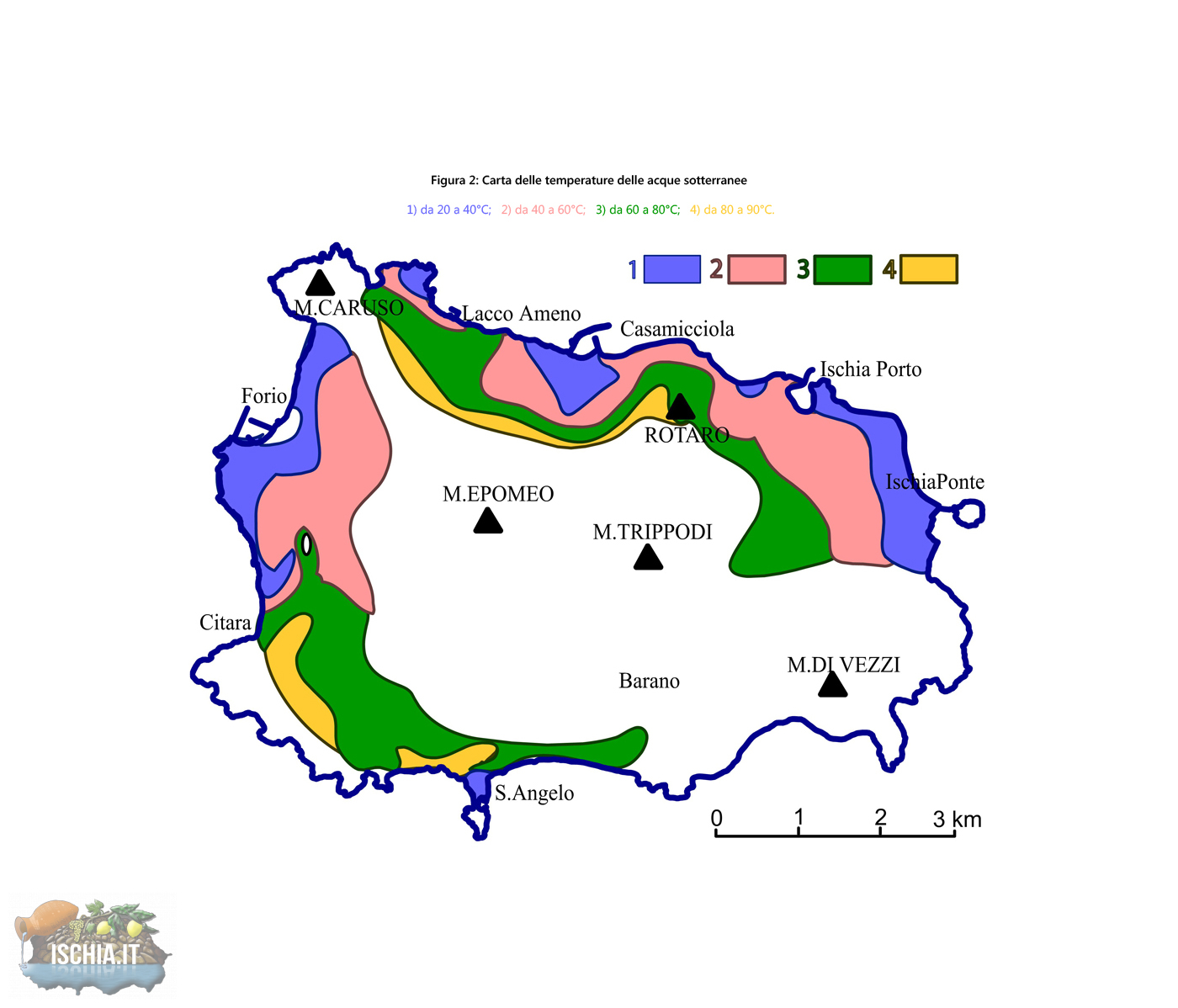 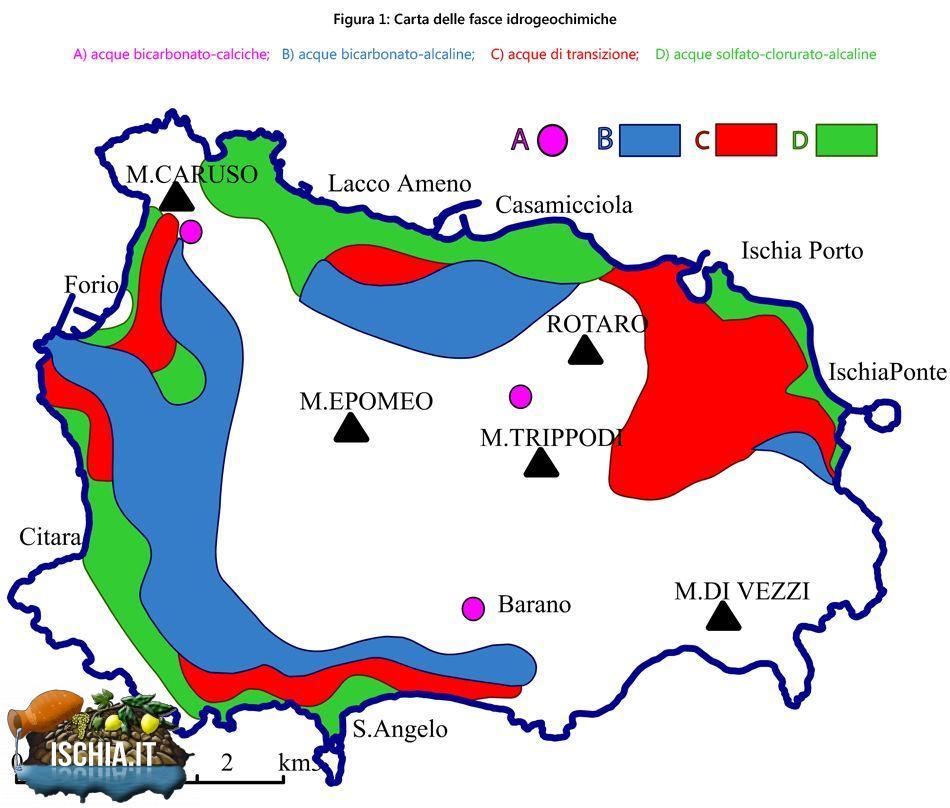 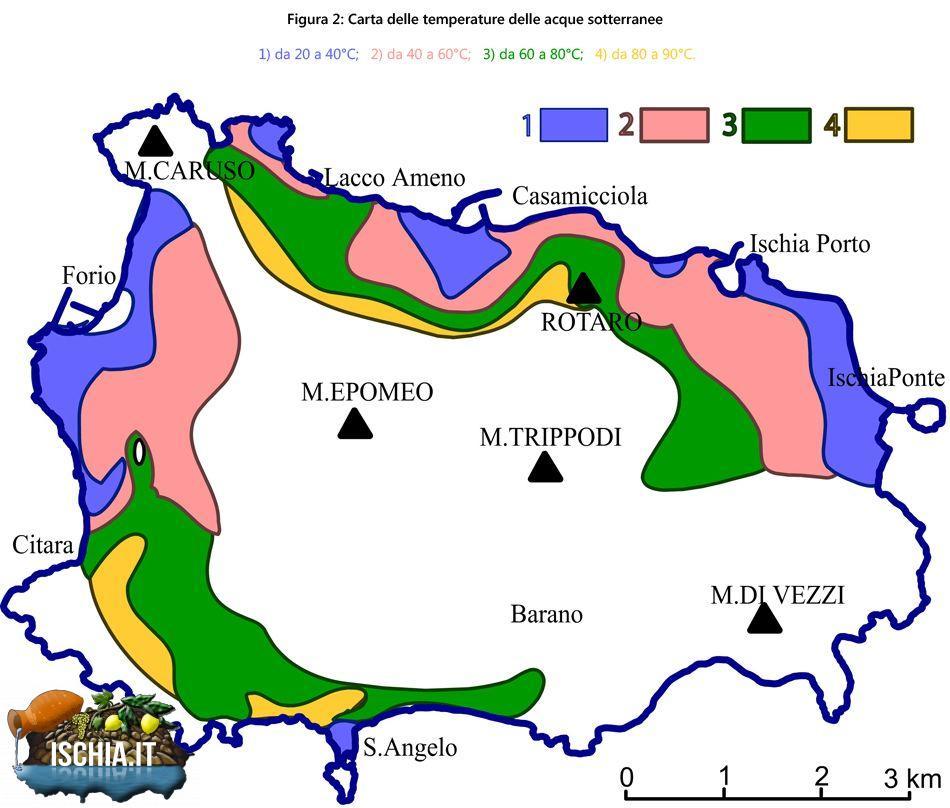 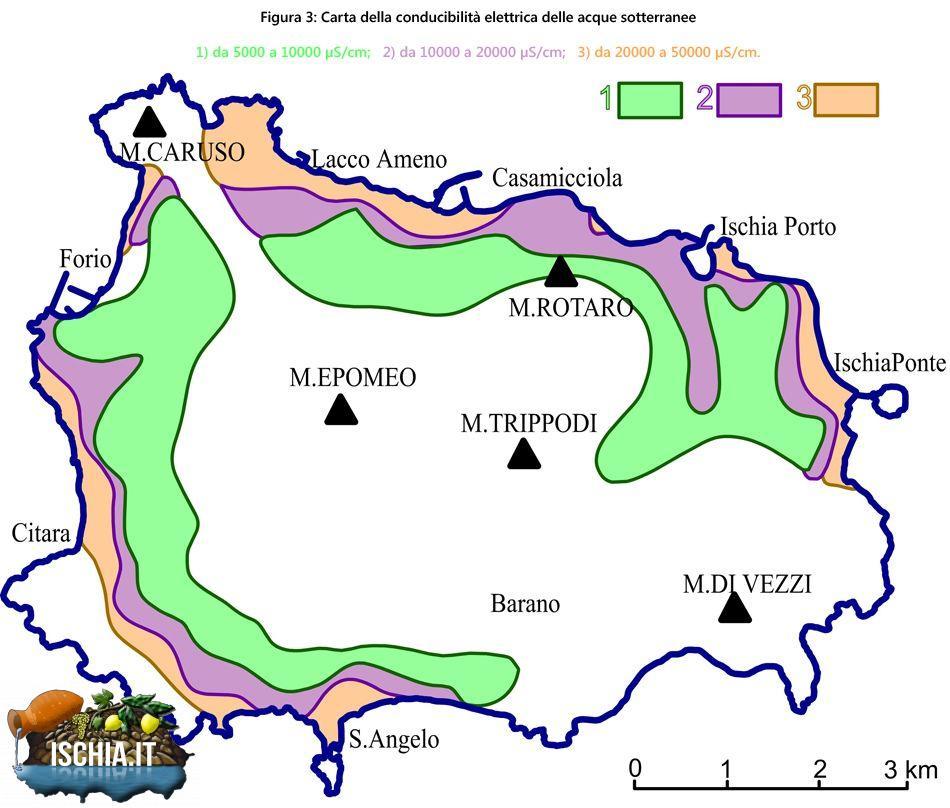 Only a few samples belong to the facies-calcic type. This consists of waters drawn in correspondence of springs and superficial wells in the internal areas of the island, concerning perched water tables. The low temperature (from 18 to 25°C) (Figure 2) and conductibility values (from 831 to 1789 mS/cm) (Figure 3), when compared to the remaining standardisations are proof of the presence of relatively superficial and fast circuits, with minimum water-rock interaction

These are bicarbonate-alkaline waters. They are characterised by high temperature values (from 40 to 90°C) and relatively contained conductibility (from 1800 to 6700 mS/cm), when compared to those in groups C and D. These waters were generally sampled in the internal areas of the island, particularly near the marginal faults of Mount Epomeo, at the top and at the foot of the same.

The waters ascribable to transition facies represent about 1/3 of the examined samples. Part of these waters are located along a probable blending line between the above-mentioned bicarbonate-alkaline and sulphate-chloride-alkaline waters. Due to the relation between chloride and alkaline ions as well as for other reasons, the same waters may be considered to be an intermediate chemism limit between those in groups B and D. As far as the temperature trend and the conductibility of this group is concerned, a decrease in temperature is observed as one moves closer to the coastline, in the area of the Ischia Graben, in the north-western sector of the island; conductibility (varying from 10000 to 20000 mS/cm) assumes generally higher values to those of bicarbonate-alkaline waters and lower values with respect to those typical of sulphate-chloride-alkaline waters. The waters that can be traced back to these facies were generally sampled from wells in the basic table of the marginal area of the island; in the depressed area of Ischia they were sampled up to a considerable distance from the coastline.

The water samples examined belong to the sulphate-chloride-alkaline group and their composition is similar to that of seawater. However, they do not derive from the blending of marine and phreatic waters. These waters can be distinguished for their high level of conductibility, which often exceeds 40000 mS/cm. Temperatures vary according to the acquiferous portion considered: in the north-eastern sector of the island, which coincides with the Ischia Graben, the temperatures are relatively low and limited to a relatively restricted interval (from 20 to 40°C); whereas, in the marginal sector of Mount Epomeo, the temperatures are generally higher and do not always decrease as one moves towards the coastline. On the contrary, in some cases they actually exceed 80°C. These waters generally characterise the wells near the coastline, including both superficial wells and the deeper ones that go beyond the water interface of the marine ingression water table. Obviously, the latter reveal higher levels of salinity and chloride. 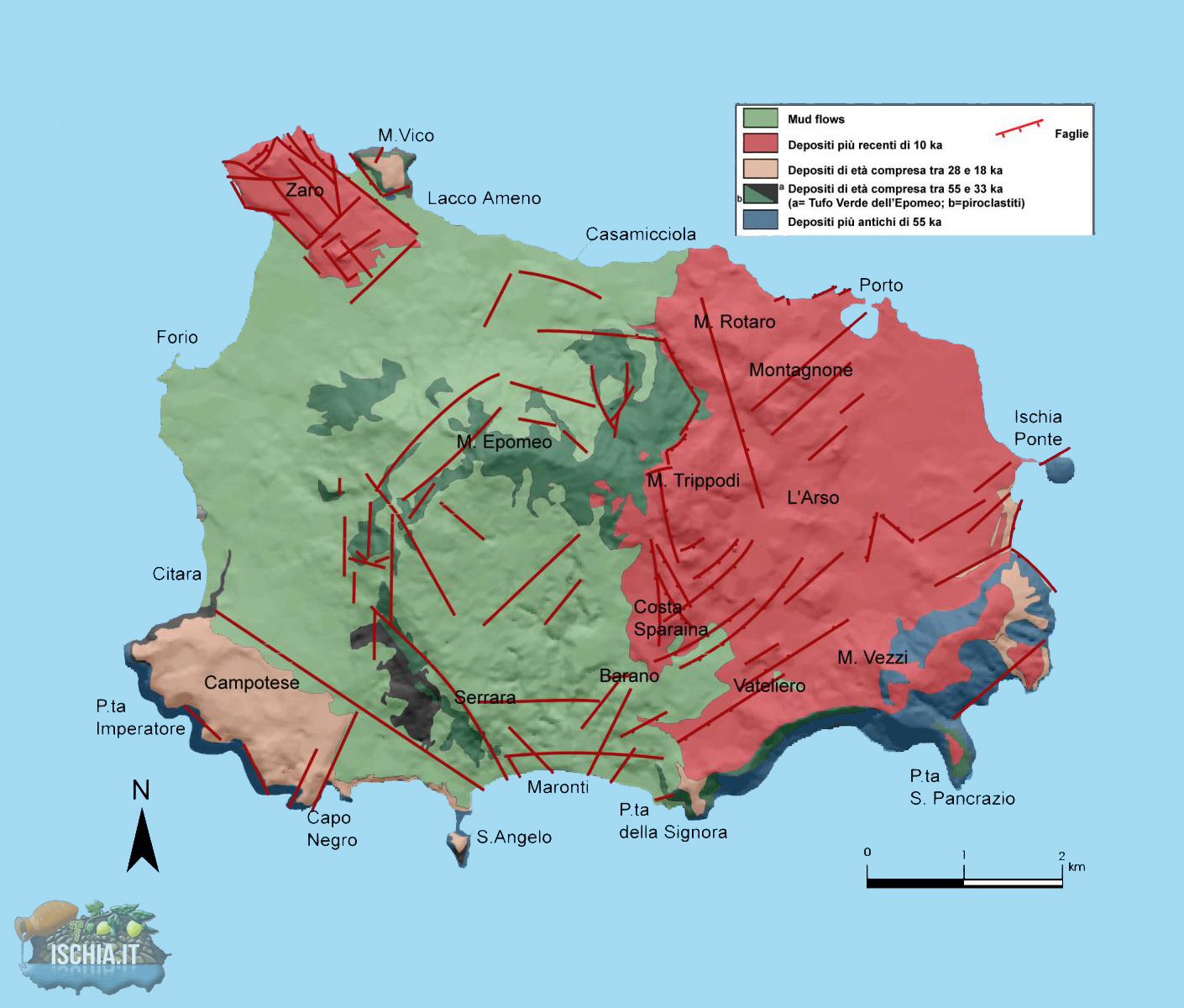 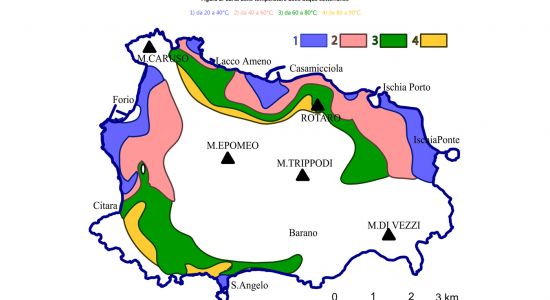 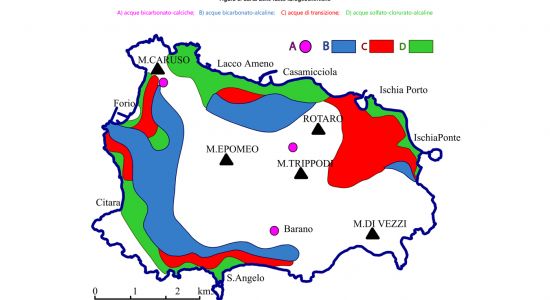 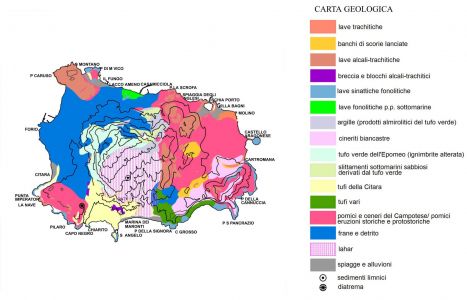 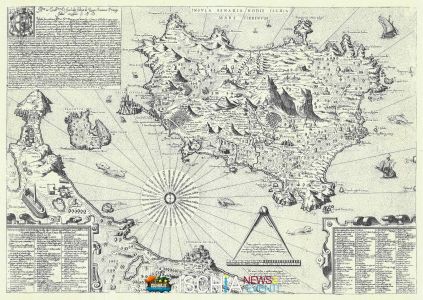 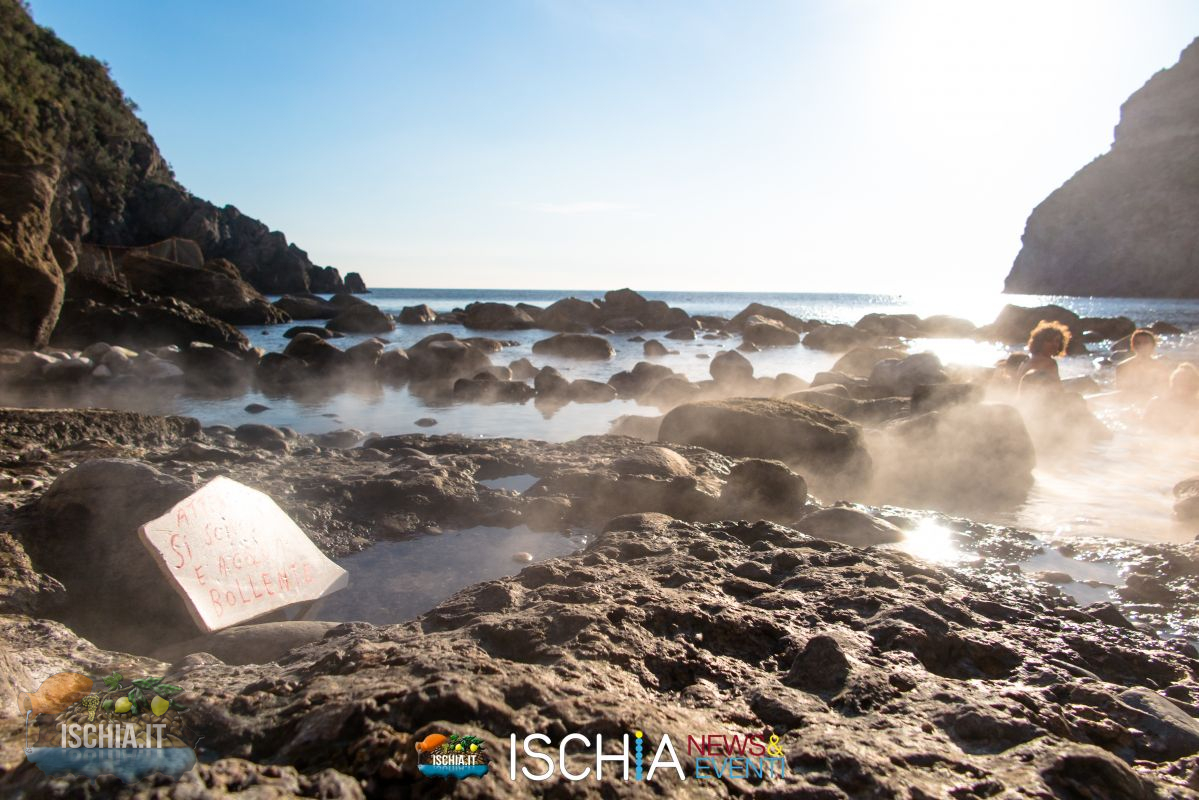